In the turquoise waters of the Caribbean, something lethal is on the move.

Scuba divers travel from all over the world to visit the little island of Bonaire, with its crystal-clear waters and a host of beautiful marine life. After three years in the “Diver’s Paradise”, divemaster Boone Fischer thought he’d seen it all; but on a routine afternoon dive, he spots something that will turn his tranquil life upside down.

From the arid shores of the ABC Islands to the tropical jungles of Venezuela—from the ocean depths of the Southern Caribbean, to the lush islands of the Northern Leewards, Deep Shadow  takes Boone and the reader on an action-packed adventure filled with danger and suspense. 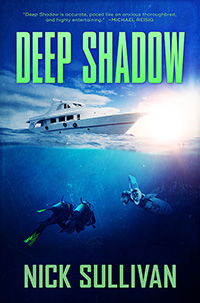 “Nick Sullivan is the real thing. This is the new author to watch! Every damn sentence in Deep Shadow vibrates with authenticity — whether it’s diving at the edge of an abyss, pushing an open fisherman to its limits in a rough sea, or detailing a claustrophobic smuggler submarine. You can smell the sweat on the bad guys, and the good guys (and girls) never seem contrived. Deep Shadow is accurate, paced like an anxious thoroughbred, and highly entertaining. I can’t wait for the next one.”

“The age old adage of write what you know, becomes very important when you write about a technical subject like scuba diving. When you get all the details right, and throw in just the right amounts of action, humor, romance, and suspense, you have a novel like this.”

— Bill Pronzini, bestselling author of The Crimes of Jordan Wise

“Deep Shadow  has it all—Suspense, Thriller… and a little bit of love. Sullivan is obviously a fan of the culture, climate, and diving in the Caribbean. The way he described each island and each dive that they made is painted in this amazing color that I felt like I was there. I can also tell that a ton of research (and non-fiction elements) went into Deep Shadow… everything felt incredibly plausible. The characters were likable and easy to root for (especially Boone) — you just wanted them to do well and to come out on top. Overall, Deep Shadow  will probably be up there with my Best of 2018 books. 5 out of 5 Stars.”

“Deep Shadow by Nick Sullivan is a sexy, espionage filled romp through the waters of the Caribbean and the islands upon it. I was immediately drawn into the Clancy-esque storyline, but was equally turned on by the romance at the center. Props to this writer for giving us both a male and female heroine, and a romance that works within and amplifies the storyline. A delicious, sexy, action packed maritime adventure that will keep you turning the pages well into the night!”

“If you’re planning to island-hop the Caribbean by boat or plane, you couldn’t have a better guide than Nick Sullivan, a great storyteller and a spout of knowledge about (to list a few) craft large and small, sea life, scuba diving, weaponry, hydraulics, geography, navigation, island history, food and drink. But he doesn’t hit you over the head with the research, and it enhances rather than interrupts the tale. He is also an accomplished audiobook narrator, including narrating this one. One of the joys of reading the print book before listening to the audio is to watch writer Nick set hurdles for narrator Nick to leap.”

“This story was great. He very clearly knows his (expletive) about these particular islands and his passion shows through the page.”

— Sam of Will Read for Booze

“If you are looking for an exceptionally well written and narrated book of adventure, pirates, terrorists, corrupt governments and drug runners, you will be happy when you dive (pun intended) into Deep Shadow, a fulfilling action-packed thriller with depth and dimension.”

“Deep Shadow is a thrill ride! You're lazily scuba diving off a tropical reef when the plot grabs you and never lets you go. I predict Boone Fischer and Emily Durand will return to save the day book after book. Bravo!”

— Tom Robbins, playwright of The Amish Girl's Guide to Armaggedon 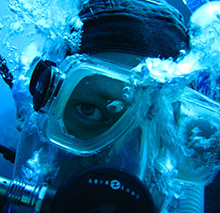 Born in East Tennessee, Nick Sullivan has spent most of his adult life as an actor in New York City, working in theater, television, film, and audiobooks. After narrating hundreds of books over the last twenty years, he decided to write his own. Nick has been an avid scuba diver for many years and his travels to numerous Caribbean islands have inspired this series. His first novel, Zombie Bigfoot, hit #1 in Horror Comedy on Amazon.